“My City Report ” is an app that allows citizens to easily report problems and notices of the city, such as road damage. The app enables citizens to directly report the issues to the local government, and this saved both of citizens who were lost in finding the way to communicate with cities and the cities that had troubles in handling the telephone calls.

In a questionnaire survey conducted to the app users, almost 100% of the respondents answered that their awareness of the city had changed after using the app, and also 100% of respondents think that My City Report is a good project. (Chiba Repo Questionnaire Result )

The local government has also been able to reduce the costs of inspection, receiving calls and asking the field reports by letting the users to report issues directly through the app. How My City Report Team made this “win-win’ Digital Transformation successfully?

In this article, we asked a developer from My City Report to find out what are the key things to bring Civic hack project successful where everyone involved in this can benefit from digitalization. Also we asked about the challenges in working in government projects, and what people should know about achieving DX in the government related projects.

Key #1: Being aligned with what My City Report intends to achieve.

I assume MCR is now in the midst of the project since its beginning, and I heard that Georepublic Japan, the developer of MCR, is currently working on a project called “ALL Japan Concept” to reform MCR into a more user-friendly App. Can you elaborate on this a bit?

It’s not only about MCR, but the government project in general often involve a complex mix of stakeholders, including local governments, universities, lobby groups, and citizens who actually receive the services. In such a situation, especially after the project has been launched, we often receive a variety of opinions from each stakeholder, such as requests for additional functions or changes.

First of all, in order to decide which of these requests and various opinions from various stakeholders to pick up, it is necessary to clearly define what we want to achieve as a product.

For example, in the case of MCR, we have a clear vision of what we want to achieve as an application, which is “to make it easier for citizens to report problems in the city,” and it is important to provide functions and design that can achieve this “for the citizens” as the first priority.

As the project progresses, you’ll have more work to do, but if you only focus on the things that are just within a stone’s throw, you will lose sight of the future, and there is a danger that the core gets blurred.

I see. In a project that involves many stakeholders, clarifying “for whom” and “for what” will clarify the decision-making process and purpose, and make it possible to achieve smooth operation. With this in mind, what do you think is a “good app”? (I know this question is jumping into a quite broad discussion though…)

The current issue with MCR is that you can only post reports within the scope of the local government that participate in MCR project. This makes it difficult for users to post the issues found out of the designated area.

Key #3: When requested for a specific feature, always ask Why they need it.

Thank you, I felt LOBSTA should keep that in mind as we move forward with development. LOBSTA is currently working on a beta version and exchanging ideas with various industries in preparation for the official release in April.

Although they are actively looking for a change, we often get the feature requests that are trying to stay remained in the legacy technology. I feel it’s difficult to find the right balance between those who use the tools and those who provide them.Let me tell you an example.

There are cases where the developer feels that using Excel and PDF will not make the best our of the tool’s potential, but the company insists that “this can’t be removed from the existing workflow”. In such cases, we have to consider how to find a middle ground or how to convince them to shift the way of managing the tasks.

We sometimes encounter a similar situation in MCR projects. For example, MCR uses an open source library called “Redmine” as the core technology, and Redmine was developed based on its unique task management ethics. In other words, as long as you use this tool, it is important to deepen your understanding of not only the functions but also the concept of this tool so that you can actually improve your business, and make the best out of this tool.

When you receive a feature request, you better listen to the reason why carefully. When the client is requesting you a specific function, do not just take it as a definite request to implement other than the cases that is required by law, etc. When you ask for a reason, it’s often because of the customary or just because “nobody has done like that before”.

DX can only be achieved when both the developer and the users work together. It is essential that the person introducing the tool must be willing to change the way they work to match the tool, not the other way round. Change the “I need this function” mindset to “How can I make the best out of this tool to improve my work?. I think that a successful DX starts from changing the mindset.

The first step in implementing DX is to change your mindset to accept the change.

Key #4: Challenges you should know in municipal project

Mind Transformation before Digital Transformation is a well said statement. It is very convincing. Are there any difficulties in proposing new ways of doing things in government projects?

As I mentioned earlier, sometimes suggesting the new proposal can be challenging due to the reason “nobody has done it before”. I also think that HR is a problem. It is hard to get people familiarised with the work style when personnel changes. Another difficulty is the type of contract. For example, it is difficult to get a budget for a consulting-type order such as “improve the business process of the local government” which can’t be clearly defined. I hope this will change.

Does that mean that the bureaucratic system itself needs to be changed?

I don’t believe that we don’t need to think that big. We can see the changes are already happening in some governments. For example, Kakogawa City in Hyogo Prefecture was one of the first to set up an online application system for corona benefits, and there are other places that are working on DX ambitiously. The important thing is to take on the small challenge of digitization, and accumulate small success stories.

By accumulating small success stories and gradually building up confidence and conviction, we can change our mindset. Digital transformation may sound futuristic, but it actually starts within our reach, doesn’t it? Thank you very much for taking the time to do this interview!

Are you looking for a DX solution? 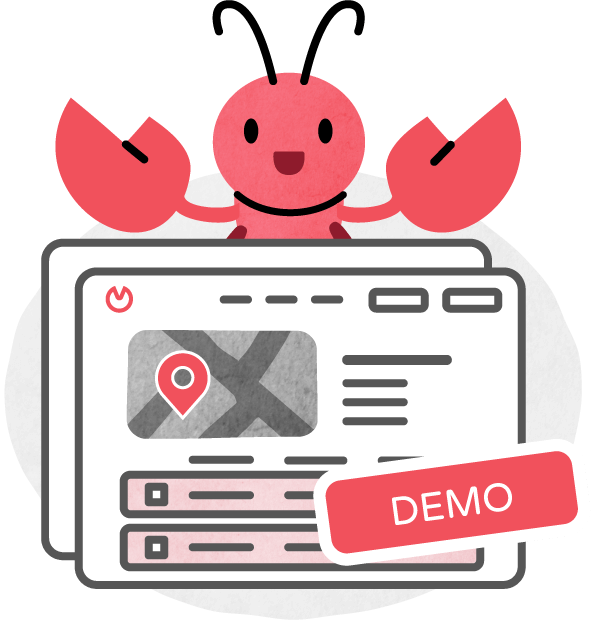 LOBSTA is a project management tool developed by Georepublic. We are the developer of My City Report, and the core technology of LOBSTA is used in MCR App too. Do you want to change your workflow by using our trusted technology? We’re currently offering a beta version for a limited time to a few companies. As GIS specialists, we will propose the best digital solution based on our rich experience in working with local governments and +10 years of leading in the open source community and open data. For more information, please visit our platform page .